Have you heard about the new modern-day adaptation of The Scarlet Pimpernel?  Masked is airing its pilot episode on YouTube on September 8th!


So!  Remember Masked?  (If you don't, go read that post and get caught up. ;))  Some pretty amazing stuff has been happening with it lately.  Casting calls have gone out, actors have contacted us with expressions of interest, we've reviewed auditions, had some meet-ups with Ally and Belle, announced two new cast members with more to come, and for the most part things are going great.

Buuut there are some roles yet to be filled and that's making us just a little bit antsy.  We've come so far and we want this to work out.  So this is where we're asking for some help... especially, especially if you live near Kansas City or know anybody who does.  That's where the show is going to be filmed and if you could in any way spread the word to Interested Parties, well, that would be a great help.

Looking for actors to play regular, recurring and supporting roles in the web series Masked, a modern adaptation of Baroness Orczy’s The Scarlet Pimpernel. Seeking both male and female actors for roles of varying size. No monetary compensation, but meals, credit and copy will be provided.

Filming in Kansas City, MO area in May and early June of 2015, and then again in the fall of 2015. Schedules are flexible.

Here are the roles that are still open:

Paul Reynard (mid-40’s to late 50’s)
Principal antagonist of the piece. Quiet and unassuming with an underlying menace. Works
closely with a drug dealing organization but stays out of the police radar. No physical
requirements. This character is a smoker, but will not be required to smoke on camera.
Must possess a valid driver’s license.

Mark St. Cyr (early 40’s to late 50’s)
Principal of a private high school, father to Timothy and Angelo. Self-assured, arrogant and
smug. Quietly irritating. Open ethnicity (will be cast as part of a biological family and decisions
will be made based on the other actors cast in the family).

Police Detective (any age over 30)
This role can be played either by a male or a female.  Businesslike, not overly compassionate.  Easily annoyed, yells at his/her inferiors.  Open ethnicity.

Louise (any age over 25)
Margot’s manager at the cafe where she works. A good boss-- tough but compassionate. Open
ethnicity.

Maxine (any age over 25)
Casting director at a regional theatre.  One line, walk-on part.  Open ethnicity.

Librarian (any age over 18)
Off-screen voice. Heard over the phone in a voicemail. Open ethnicity.

Now, the last two as you might notice, are "off-screen voices." That means that anybody could audition for those.  Basically, we'd send you the script, you'd make an audio recording of what we needed, we'd select our favorite and if it was yours then boom, you have a cameo in the web series (with credit of course, and under any name you choose).

If you are interested in doing that and might fit in with the requirements for either Eleanor or the Librarian, feel free to email us for further information.

Most importantly, if you know anybody who acts in the Kansas City area and who might fit a description of one of the people above (particularly Paul and Timothy, we really need them), please pass on this information.  Or even if you don't know anyone... maybe you can pass on the info to someone who does!  Any interested parties can also email us for the full casting call and more information.  Our email is maskedwebseries{at}gmail{dot}com.

Meanwhile, we as the casting team are taking this picture to heart... Because the real teasers and trailers out there are kind of boring...

There are, to date, approximately sixteen film and television adaptations of Baroness Orczy's The Scarlet Pimpernel floating around the universe.  We say approximately because the Wikipedia article we were counting from may have missed a few.  These adaptations cover a wide range of books in the TSP series and span over eighty years of movie-making, yet not one of them brings the Scarlet Pimpernel into the twenty-first century.

This fact, gentle readers, is about to change.

It is our privilege today at The Day Dream (the number one Scarlet Pimpernel blog on the world wide Web) to announce the production of Masked, a brand-new literary web series, based on none other than... you guessed it... The Scarlet Pimpernel.

Co-creators Amy Dashwood and Alexandra Rovirosa have been developing this project since January 2014, and though it's still not ready to be seen by the adoring public, we felt it ought to be announced sooner rather than later.  Masked will air on YouTube in summer 2015, presenting the modernized story of The Scarlet Pimpernel in weekly installments for the digital age.

Masked will delve into the backstory and conflicts surrounding Margot James, an aspiring actress struggling to get her sister Suzanne into college while dealing with the long-term consequences of her father's shady past.   The world of organized crime is far from dead in 21st-century America, yet one young daredevil known only as the Scarlet Pimpernel is slowly but surely infiltrating the darkest depths of inner-city drug rings to rescue victims and addicts.  Caught up in hero-worship of a man brave enough to stand up against immorality and injustice, yet still dogged by the choking influences of her controlling godfather (smuggling ringleader Paul Reynard), all Margot wants is to get away from her past and start a new life for her sister.  But when romance starts to blossom in an unlikely place and a regrettable decision earns her the pursuit of her biggest dream, Margot's fairy-tale ending seems a little too good to be true.  And when Paul approaches her with an unavoidable decision carrying terrifying implications, Margot is caught between an "either" and an "or" that challenges everything she's tried to stand for and the people she loves most in the world.

To stay updated about the production of Masked, please visit our Facebook page and Tumblr blog and follow us on Twitter! And don't forget to share the blog button below to spread the word about this exciting new venture.  ;) Thanks for joining us!

wishes were horses, then beggars could ride, et cetera and so forth.  If only someone really were casting a new adaptation of TSP and giving the Percy role to Tom Hiddleston... because he'd be so totally perfect.  We all know it in our heart of hearts but some talented artist actually took the time to envision it, and voila. 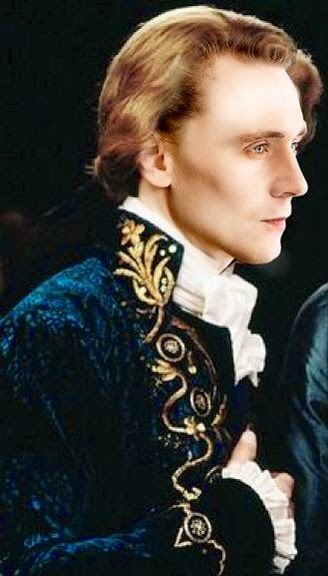