“And with the graceful gesture of an accomplished dandy, Sir Percy flicked off a grain of a dust from his immaculate Mechlin ruffles.”  (-I Will Repay)

“Sir Percy Blakeney- a prisoner since seventeen days in close, solitary confinement, half-starved, deprived of rest, and of that mental and physical activity which had been the very essence of life to him hitherto- might be outwardly but a shadow of his former brilliant self, but nevertheless he was still that same elegant English gentleman, that prince of dandies whom Chauvelin had first met eighteen months ago at the most courtly Court in Europe.  His clothes, despite constant wear and the want of attention from a scrupulous valet, still betrayed the perfection of London tailoring; he had put them on with meticulous care, they were free from the slightest particle of dust, and the flimy folds of priceless Mechlin still half-veiled the delicate whiteness of his shapely hands.”  (-El Dorado) 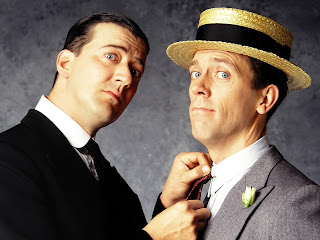 “I remember reading in one of those historical novels once about a chap -a buck he would have been, no doubt, or a macaroni or some such bird as that- who, when people said the wrong thing, merely laughed down from lazy eyelids and flicked a speak of dust from the irreproachable Mechlin lace at his wrists.  This was practically what I did now.  At least, I straightened my tie and smiled one of those inscrutable smiles of mine.  I then withdrew and went out for a saunter in the garden.”  (-Right Ho, Jeeves) 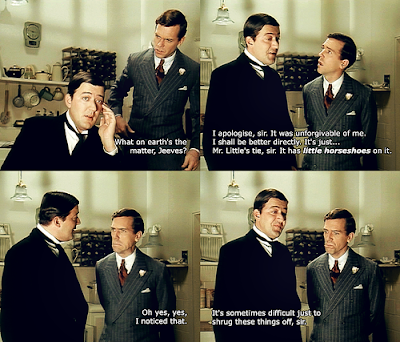 “I know you did, Jeeves,”  I said, laughing down from lazy eyelids and nicking a speck of dust from the irreproachable Mechlin lace at my wrists."  (-Right Ho, Jeeves)

"Psmith flicked a speck of dust from his coat sleeve."  (Mike and Psmith)

What more is there to say?

I KNEW I loved P.G. Wodehouse. The man had IMPECCABLE taste in literature.
I'm sitting here with a ridiculously goofy smile on my face right now... oops, there seems to be a speck of dust on the irreproachable Mechlin lace at my wrists. *flick*

SCREAM! My belovedest Bertie TALKS ABOUT PERCY. This is just too much. LOVE LOVE LOVE!!!!!

Not to copy Miss D, but there's a reason he's one of my favorites. :-D

I knew Miss Anne was a genius. :) Thanks a million for pointing that out!!!

Another book to add to my list of must-reads. Brilliant! :D

Ooo! I've read a couple of those and watched the whole series! They're hilarious! :)